Today we start a new feature on the iGDN’s blog: the  column, where members share their – hopefully – thought-provoking ideas and impulses. The first one takes you now into the vastness of outer space.

It’s November and if you’re in Germany these days, you may well find yourself running into a traditional St. Martin’s parade with kids holding lanterns and singing “lantern, lantern, sun, moon and stars” (which actually rhymes in German). And, if you look closely, you can spot very traditional lanterns with the sun or the moon on it. And if you look even closer, the sun features a full, smiling, red mouth, the big eyes have long lashes and the cheeks are blushing. In contrast to that, the moon has strong, dark eyebrows, sometimes it smokes a pipe and, overall, it has sharp features.

Apparently, the sun appears to be female while the moon is male. The explanation for this could be the obvious linguistic one: In German as a Proto-Indo-European language, the moon (der Mond) is, as indicated by it’s article, male, the sun (die Sonne), on the other hand, is marked as female by its article. But there’s more to it than this. 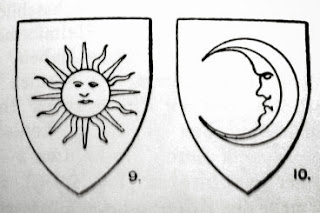 What appears to be a childlike interpretation of celestial bodies, is actually a symptom for the dichotomous compulsive behavior, for the need to gender things. Remarkably enough, the gendering of the sun and the moon in the Romance languages is exactly the opposite: la lune and le soleil.The things and phenomena people find up in the sky have been gendered ever since, examples are countless and have been dominating religious and mythical motifs all over the world: from ancient Egypt and their gods Nut (sky) and Re (sun), to the naming of the planets Venus and Mars. Blatantly, we could say that the need to gender stars roots in the need to humanize the unknown, but isn’t it rather the design of first common virtual space? And I mean virtual in it’s fictional sense. Before Yuri Gagarin entered and experienced outer space, this space was the archetype of virtuality: nobody could prove its existence and yet it affected mankind in its very being. The constitution of space itself was nothing but imagination, and human imagination divided it into male and female. Judith Butler explains the dominance of hegemonic imagination with the naturalisation of the heterosexual morphology, which, in this context, is transferred to something as virtual as outer space and its bodies.
The act of maternalizing the sky and outer space does not stop with the Egyptian goddess Nut: In the final scene of Stanley Kubrick’s Space Odyssey the camera glides through outer space, and right next to the earth, an embryo is floating in weightlessness. The embryo is nothing but a promise of the soon-to-come return from the alien worlds . In this way, we can read outer space as the big all-gobbling psychoanalytic archetype of mother. On a different level, the rocket appears as the prototype of a phallic symbol that penetrates the sky, while space travelers return to earth in a uterus-like capsule…This rocket became the symbol for a superior, androcentric mankind: the media presence of scientists, astronauts and pilots such as Wernher von Braun, Yuri Gagarin, Neil Amstrong and Jesco von Puttkamer leaves no doubt that the space persona is male. The western media portrayed feminity in the space aviation context, and preferably the astronaut’s wives, as picture-perfect but powerless, in a home with kids, admiring the work of the husband and his colleagues. In fact, during the US Mercury and Apollo-Missions, the astronauts’ wives were the focus of several PR-campaigns as described in Lily Koppel’s The Astronauts Wife Club: “Overnight, these women were transformed from military spouses into American royalty.”  The pictures are striking: all dressed-up women gathered around a model of a rocket, listening like pupils to a scientist in a white frock.
The apparent contradiction of femininity and technology as portrayed by the conservative western mid-century media, was not as strong in Soviet Russia: Valentina Tereshkova entered outer space in 1963, 20 years before the first western female would be sent on a mission. US-astronaut Mae Jemison: “I thought that the space program was terribly unfair. I used to get really irritated when I was a little girl. It pissed me off. (…) Okay, there were only white males going up to space in the US and so if they ran into any aliens this is what they would think all humans are like.”

Outer space gives us the opportunity to think beyond biological determinism, because outer space appears to be unnatural. Therefore the question of the female and male nature should be irrelevant, which of course it isn’t.
Only 40 years after the US lunar Apollo mission, we find a small shift in interest that goes beyond the media display of the astronaut’s wives: for example, publications like TheWomen of Apollo by Robyn C. Friend focus on the contribution of women to space engineering and science.

So, it’s not a waste of time to think about gender and outer space in the context of design. This article only scratches the surface regarding the issue as to how research on gender and design in space travel can reveal a lot about the mechanisms and problems of the gendering of space in general. Prof. Dr. em. Uta Brandes emphasizes the necessity of talking about Gender and Design especially in these times of... Milena Mussi – How are you today? (Video)

We are happy to host Milena Mussis statement on the COVID-19 situation. Thank you Milena, for your very personal...

Thank you to Kajsa G. Eriksson for pointing out the importance of Gender and Design to preserve and enforce...