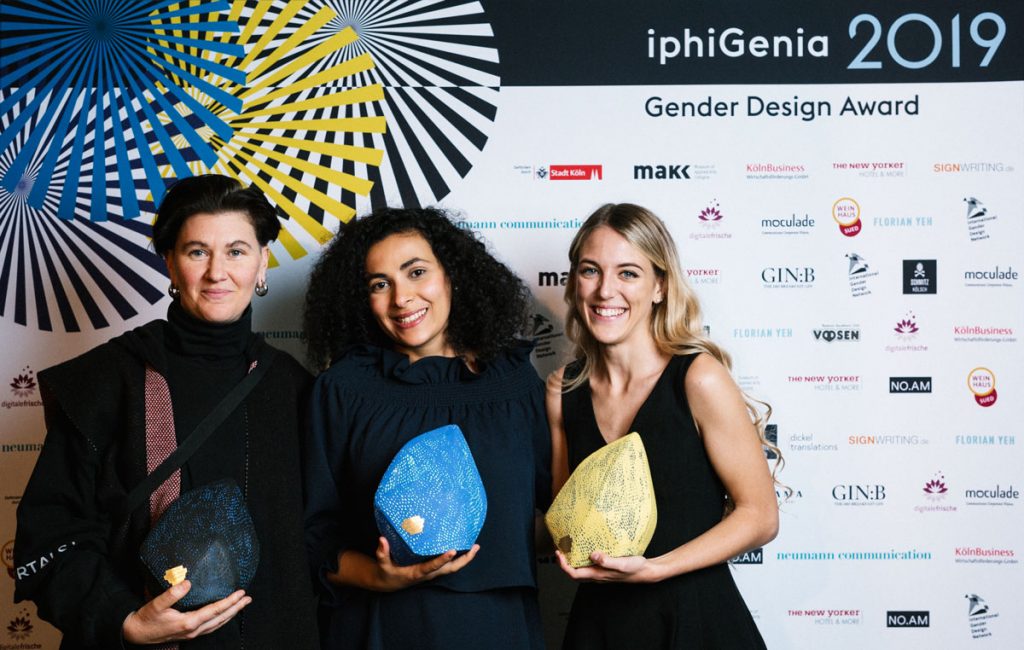 This year’s iphi winners come from Amsterdam, Beirut and San Francisco – three iphi2019 winners, three continents, but one overarching theme: their work represents smart design, free from (or against) stereotypes and it’s for this that they are being recognized. With the 2019 iphiGenia Gender Design Awards, the iGDN as the organizer of the prize has shown the significance of integrating gender issues in design.

Our #iphi2019 winners share the same intention: using design to make gender prejudices and ignorance visible, to highlight diversity and to express the untold.

The winners’ work and the effect this kind of work has on consumers, clients and students has shown us that gender issues have to be classified at the same level as human rights and that, with design, we can do a lot to move things forward.

With her work, new genres artist Rora Blue highlights the gender-related constraints young people are subject to worldwide. She collects the personal experiences of her followers in the form of short text messages, transfers them into photos and colours and plays them back into the channels from which they originated. She thus enables those who, up to that point, were not seen or heard, to articulate themselves as a collective. For this achievement, Rora Blue has received the iphi 2019 in the category Volition. (Images © Rora Blue)

Seba Ali (Beirut) is an internationally renowned pianist, professor, mother, Egyptian national, muslim and activist, who, together with colleagues and students, launched the cultural Imagine event at the Lebanese American University in Beirut in 2016. The workshops, performances and concerts in this series encouraged visitors to implement their own ideas and, free from any constraints, be themselves and live according to their own ideas. Seba Ali and her team have received the iphi 2019 in the category Revolution for the first-ever queer fashion show staged in Lebanon. (Images © Samer Beyhum (The Lebanese American University)

Although usually given to an institution or company for their excellent overall concept, including communications and products, the iphi 2019 in the category Evolution has been presented to a single person who unites all these criteria: Gabriel Maher.

Maher’s concepts show how the binary gender system (female or male) in all fields of design can be overcome through teaching, writing, performances, interventions, etc. (This is also the reason why Maher prefers to use the personal pronouns they/them/theirs.) Gabriel works with many different forms of (re)presentation, thus making an essential contribution to developing and communicating awareness of gender-sensitive design. Gabriel’s projects focus on gender and identity in design by critically analysing human and artificial bodies, the space that surrounds them and the relationships between objects and systems. Object relationships are deconstructed in order to show the ways in which everybody and everything in society is determined by design. Only after we have become aware of this are we able to intervene in order to critically change societal processes and artefacts. (Image1 ©Femke Reijerman Image2-4 ©Gabriel_Maher)